overland & the shortest of Days

As I landed in Norway for the holidays, I was greeted with lots of early snow, great stuff, to get going on the nordic skis. For Satu & I, it was great to be back on the skis again. We had a big naming party for little one where the god parents got to be centre of attention, it was quite a cool informal evening. The Finnish in-laws were nervously waiting to hear what the name was, as is Finnish tradition, new born babies do not get a name until 3 months or so old, most certainly a custom from when high infant morality was common place, thankfully we have come a long way, yet the old customs still live on, which is rather good I feel. When speaking to Finland, we learnt of the poor, in fact no snow conditions, skiing at Christmas may not be an option.

He’s my girls, nice hey, they are en route on the train from Oslo to Stockholm, easier than flying. We in fact left Lillehammer, for Stockholm, overnighted in the Swedish capital, and then took the ferry to Helsinki and train onwards to Tampere, it took a day and a half, we took, 2 roller bags and a pram and it was rather relaxing. International public transport nordic-style, on time, clean and easy, very nice indeed.

When in Stockholm, we even took the transit system, baby and all to the Norrøna outlet, for some great margins. I really like the style, cut and clean functionality of the Norrøna gear, designed in Norway as well. I got a wonderful pac-lite jacket as above for UK rainy biking and a soft shell line up for nordic skiing, if only there was some snow to enjoy….

We Christmas’ed at the in-laws, on the lake, which is nearly always frozen over by December, however not this year, no snow either. A rather mild affair, we even went sea kayaking on Christmas Day, which I have been recently informed is now called aqua-rambling, that does certainly frames the crowd of paddlers often out on the ocean’s quite well.

Our non-nordic nordic Christmas thankfully took a turn into winter, with a trip further north, to enjoy the normal state of play, that is snow. New Year’s was taken with friends in Tahko near Kuopio, we hit the tracks and enjoyed the shortest days of the year with reasonable temperatures and smooth gliding, ohh and easy parenting. During our New Year celebrations, we had a few games, one was in teams of two, start your own fire, only using wood and a flint, the dry birch of the northern forest proved excellent, and both Satu and I had our fires roaring in minutes, whilst our baby enjoyed the fun from inside. 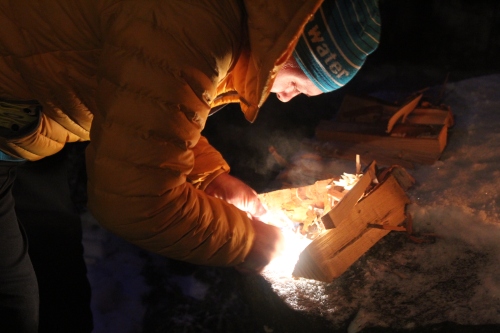 No sooner had we headed back to brown snowless Tampere, than I headed back to Devon, 3 flights in one day, the first from Tampere to Copenhagen, was sporty, as we ferry glided on the glide path into Denmark, I could see the whole runway from the near of the plane, the big storms of near January were a foot, whilst en route west. I hopped to Amsterdam, and then a short hop to Exeter, not a bad route really. As soon as I landed, the rain greeted myself, and I knew for a few days at least the paddling would due very fine.

Nick Horwood and Finn Burrows, had been filming in Norway last summer, and here’s their fine short movie Vaniljesaus. We played it at the Adventure Paddler’s weekend, and it went down a storm. With great short films like this and amazing paddling documentaries, it’s no wonder that the sale of hard media in the form of specialist DVDs is over. These days I wonder what to do next with Westgarth TV’s productions, either go towards crowd sourcing, for a limited release or make short pre-sponsored segments, either way, it’ll be tough to make an income from either approach. Downloading has killed the specialist film maker, whilst iTunes is a great model for those at the top of the pile, everyone else is left to wonder what if any is the solution, answers on a postcard, or in the comment box below…..

At least now I am in the same yearn, and only 3 months, well may be 4 be hide blogging.